November in my garden

So since I last wrote, winter seems to have appeared here in the north west of England where I live, we’ve had our first frost this week and some parts of the country are forecast snow. Its not a time of year I enjoy, although the colder it gets the better it actually is for the garden as it will kill all the bugs. Fortunately for me at the moment I don’t actually have to go out each day if I don’t want to!

In an October post I wrote a short to do list of jobs and bar one I think I have completed them. I cleaned the greenhouse inside and out, and all the pots and trays have been cleaned. Its also been insulated with bubble wrap and the plants that live there in winter – the dahlias, and half=hardy plants in pots have moved in.

I’ve also planted most of my bulbs, just waiting for a few more pots to come before I finish that task. I’ve spread compost around the garden, well spread is probably a little too precise, I’ve chucked the compost at the beds and hoping the worms do the rest. Today, I have taken out some cosmos that have finished flowering and planted wallflowers in place of my dahlias in the 2 troughs (picture below). These particular dahlias I grew from seed but the tubers that grew were amazing and I don’t know whether to try and over-winter or just sow the seeds again next year.

I have struggled a little with my challenge of finding something new in flower for November, so I’ve pictured some things which are either new to the garden or have pretty leaves or are simply still flowering. 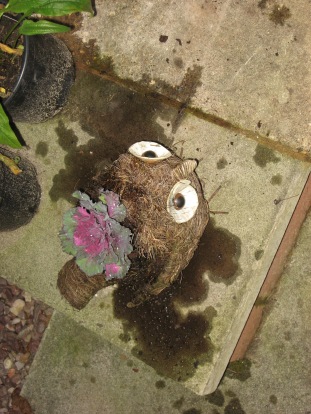