So although I don’t like winter, I don’t mind snow if I don’t have to go out in it which today I don’t. I also think the garden looks so pretty covered in snow. 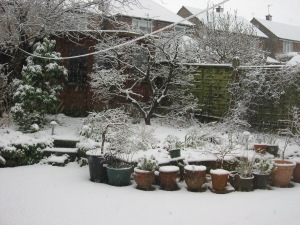 Spring is on its way

Winter is my least favourite season as I can’t get into the garden much and nothing looks very alive. I do have some new warmer gloves to keep my hands warm, but now need something for knees and feet!

However, in the last few days I have noticed my hellebores are starting to flower so I have cut away the old leaves. Also my bulbs especially the ones in pots are coming up. I planted some new white tulips and daffodils last year by the front door and some miniature yellow daffodils in my wooden wheelbarrow and other pots.

I am also thinking about what I want to plant for the summer and have bought some new seeds today, lovely blue cornflowers, stock for a gorgeous scent, these might be better in pots and 2 others which I can’t remember the names of.

I meant to say in my original blog that I garden on clay soil in the North West of England. We get quite a lot of rain and some flooding in the flower beds, however, I still find that I can grow a lot of my favourite flowers without trouble, However, I do always start my seeds off in trays in the greenhouse and don’t put them out until I think the frost has finished. I prefer bulbs in pots so they don’t rot and also it  doesn’t mean I am digging them up when I think I have found a bare patch of soil.

That’s all for now. Any questions are welcome. I hope you have enjoyed reading my blog.

Welcome to my one new follower and anyone else reading!

Well I started this with the intention of regularly writing about my garden but to be honest, got very busy in the garden and haven’t really had much time.

The part of the garden this was originally named the ‘wonderland garden’ has now been built over. However, I do have a new patch which is mostly full of self sown foxgloves, I will leave them in as I think they are such pretty flowers. I also have 2 front and 2 back gardens to look after so that will keep me busy.

Looking back on last year, I sewed 4 lots of seeds in my greenhouse, potting them on before planting in final positions and all were very successful. The white cosmos, I planted out in July time and with at least weekly deadheading flowered until December. They also grew so tall they needed staking and where probably 5ft or so. The pink cosmos although a lot smaller which is how they should grow were lovely as were the zinnia, scabious (also continued flowering til December) and the chrysanthemums.

The lupins were covered in white fly which wouldn’t die no matter how many times they were sprayed but still grew well. My dahlias in pots didn’t flower much and are in the greenhouse overwintering and hopefully considering a better show for next year.

The tomatoes in the greenhouse did well but were also covered in whitefly, I think this was due to poor ventilation, we didn’t want to open the door as we would have had a cat inside! Will have to rethink this for the summer.

I will endeavor to post more often this year.