To cheer us up

Us Brits always like to discuss the weather, it’s always too hot, too wet, too cold. Never just right! So it’s been raining here quite a bit for the past few days but I’m so glad as the garden desperately needed it and our water butts were quickly becoming empty!

I have a picture of the rose ‘Nostalgia’ for you today, it has a beautiful scent similar to peaches I think. 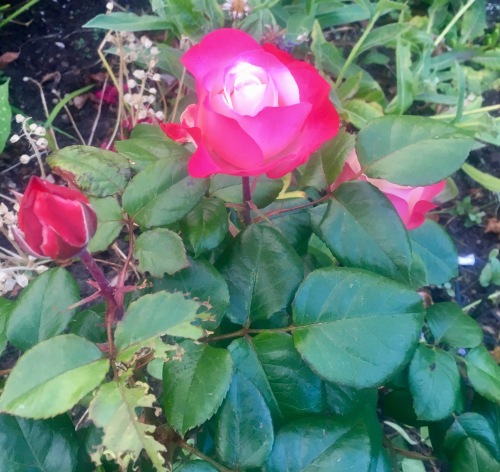 Following on from a couple of different posts I thought I would do a post specifically showing plants from the back garden (original house). It is pretty small and has 3 sheds including one dedicated to garden tools and other garden related stuff, also a summer house which is hardly used now but does feature on one picture. It’s basically 2 raised beds either side of the summer house with mostly trees and bushes on one side including my cherry tree – it has 2 fruits so far this year and they aren’t ripe enough for harvesting so I hold the birds don’t get there first! The other side is mostly flowers and I do feature them occasionally in the blog. We have about 10 pots with lilies, acers, 2 tiny roses – they get smaller every year and a few other things. There is a double skinned wall by the house with 2 roses with their roots in the drain I think. So here are my pictures: 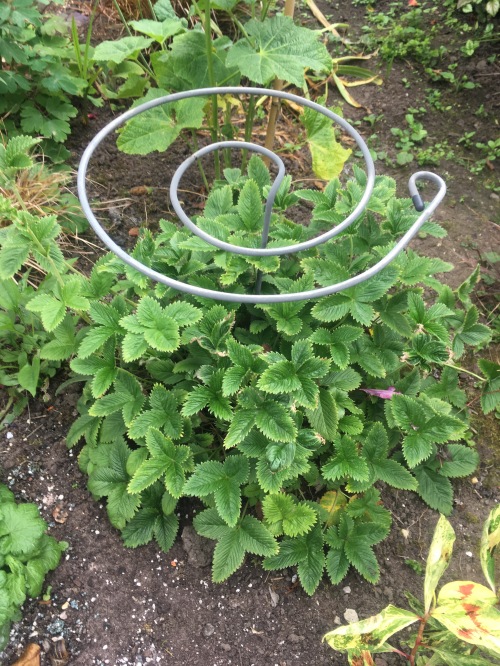 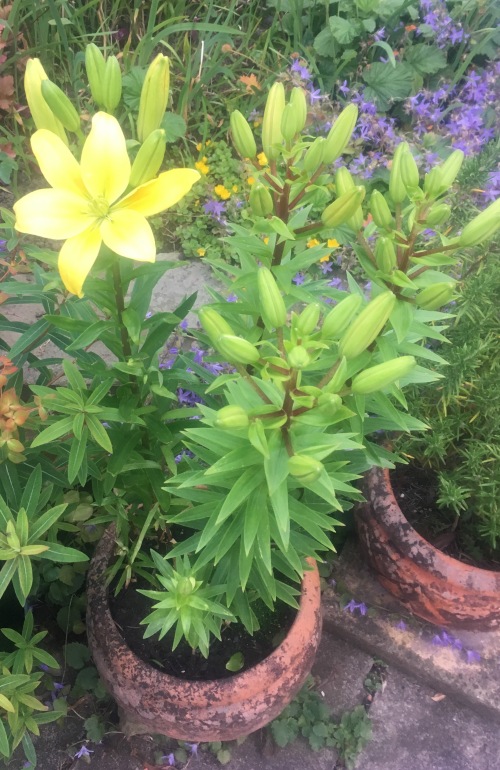 So you all know the name of my blog is Wendys Wonderland Garden, did you ever wonder where the name came from? No, well I’ll tell you anyway.

I recently found a picture of the original Wonderland garden, it was between the front doors of our house and the semi next door. It has sadly been built over now and the plants redistributed across the garden although some are still in pots. It was a secluded area, with a big lilac at the end and a bit of a secret garden probably why I named it a Wonderland garden. When it got built over and I started the blog I just liked the name beginning with W like my name and it’s stuck. The blog though includes the whole of the gardens (2 front and 2 back) as we later bought the aforementioned semi and built a porch (to connect the 2 houses ) over my precious garden where I worked hard to make it nice. There were hellebores, a hosta, penstamen, poppies, an echinacea that didn’t survive the move, bleeding hearts, astrantia, Michaelmais daisy and a few other things. Here are the pictures. I still have the poppy although it’s changed colour now and the last picture is the poppy earlier this year flowering. So there you there, just in case you wondered! 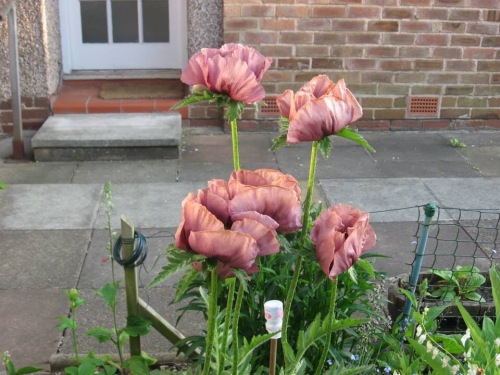 The poppy as it is now. Funny how the colour has changed but I’m sure it’s the same one – Pattys Plum I think.

They’ve quickly become one of my favourite summer flowers. I should probably say cut flowers but actually I don’t bring them in much. I love them on the plant where I can get my daily fix of the amazing scent. 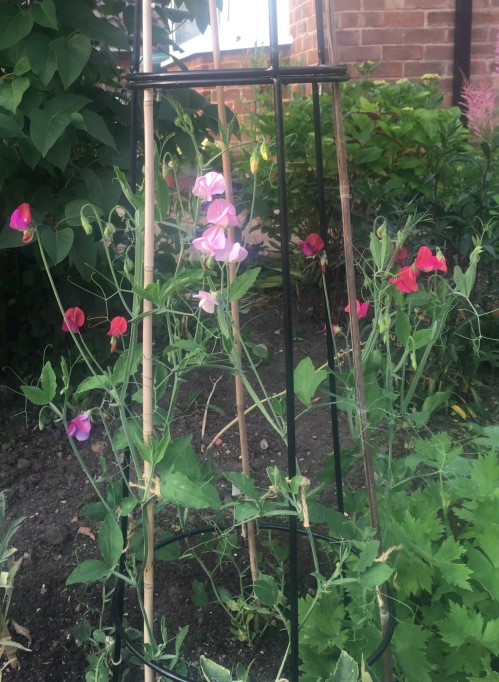 Today I went with a lovely lady from church to the BBC Gardeners World live show in Birmingham NEC. For any overseas readers I should maybe explain BBC Gardeners World is a weekly gardening programme with a magazine and this year celebrates its 50th birthday. We had an interesting trip to the show, in that we couldn’t get off the train at the correct stop as the doors shut just as we got to them and so we had to travel a further stop on, get off and get a train back to the correct station. Fortunately we didn’t have to pay anything extra but it did take up about 45mins we could have been at the show.

Its pretty similar to RHS Chelsea flower show in that there are show gardens and many stalls and a couple of flower marquees. There are also a couple of theatre set ups for ‘celebrity’ gardeners such as Monty Don and Carol Klein to speak and we heard Carol Klein today. The BBC Good Food show (another magazine) was on today as well at the same venue although most of it was very expensive. We did enjoy some samples of cheese and sausages though.

Here are some of my pictures from the show gardens and floral marquee. 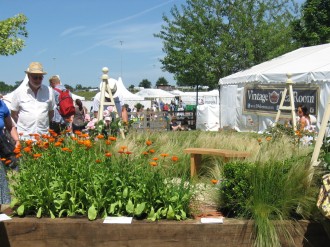 Firsts of the season

Just a few pictures of ‘firsts’ of the season. A rose called ‘Hot Chocolate’ with a lovely scent. It’s actually not the first rose to flower in the garden but it is the first of the ‘new’ roses only 2 years old (I think) opposed to the others which have been in the garden all my life!

A purple cornflower grown from seed and planted only a few weeks ago. 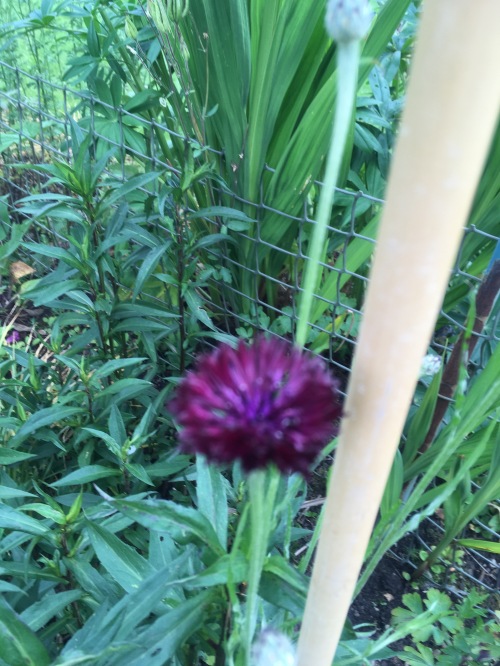 A sweet pea in a pot, not grown as tall as expected so far and therefore looks slightly ridiculous with the 2m supports it’s got! But it smells amazing and is more purple than the picture shows 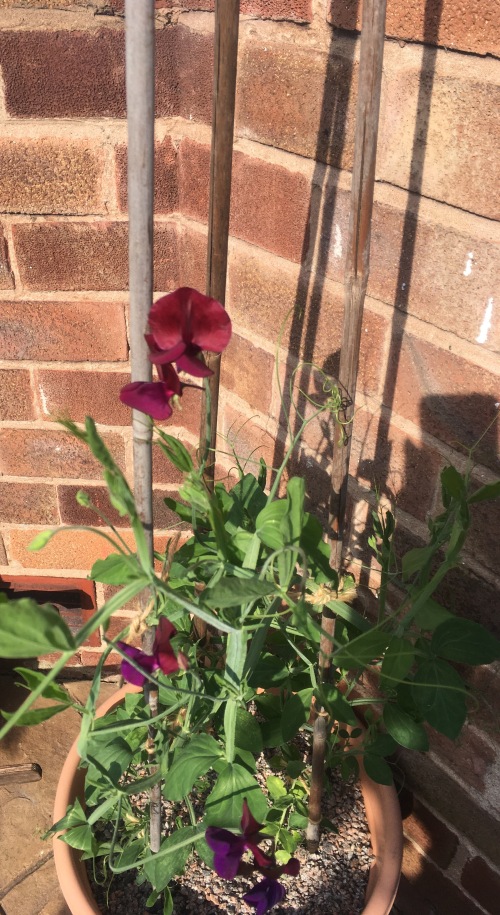 Well we were certainly lucky with the lovely sunny weather on Friday for the day out at Chatsworth flower show. It’s not been as nice since! However, there was some dry weather on Saturday and I managed to get 2 trays of seedlings in the garden. 1st picture cosmos and 2nd picture zinnia which some pest has been eating in the greenhouse. I don’t know who or how. I put a line of slug pellets in front of the door on the outside and have been collecting dead slugs ever since.

I think I could do a post daily at the moment as there is something new flowering daily but that would probably be too much for you my lovely readers. Here’s a few things flowering right now in my garden. The pale coloured foxglove is so pretty and I don’t think I planted it myself, think it’s self sowen. 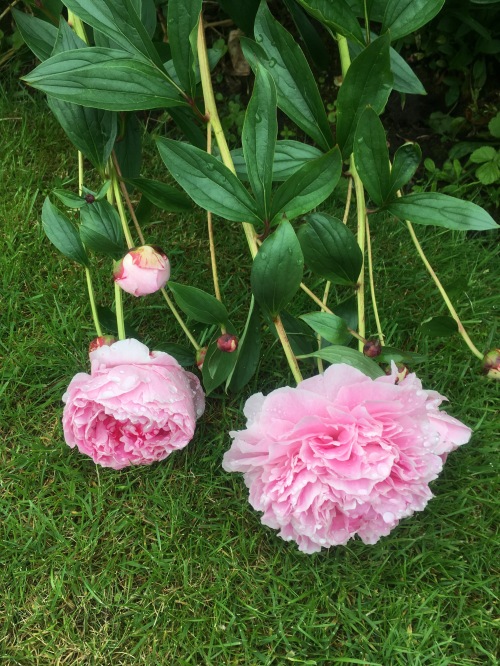 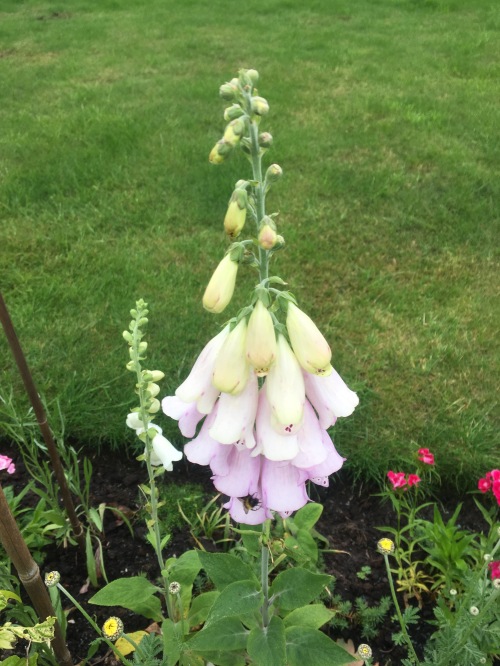 I was up early to visit the first RHS flower show at Chatsworth in Derbyshire. I had arranged to go with my friend who lives about 1/2 hour away in the Macclesfield countryside, it was a lovely drive up there, all green opposed to last time I went when it was so cloudy they were coming down to meet me. Sadly I managed to leave my camera in the car so I didn’t take as many pictures as I planned.

It was a bit different in that the site has a river and the flower show was both sides of it with 2 bridges over, one much sturdier than the other. We were only there a few hours so tried to see as many of the gardens as we could. Here are the pictures I took. Hopefully we’ll get to go next year for longer. 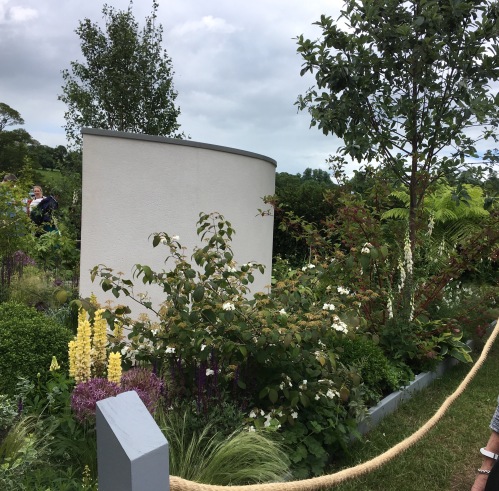 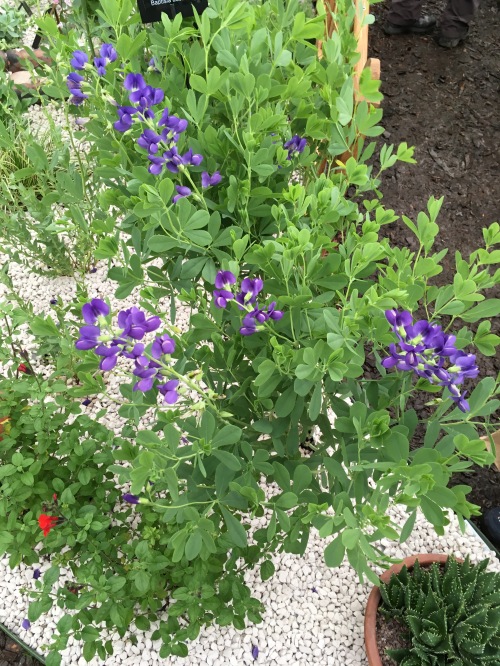 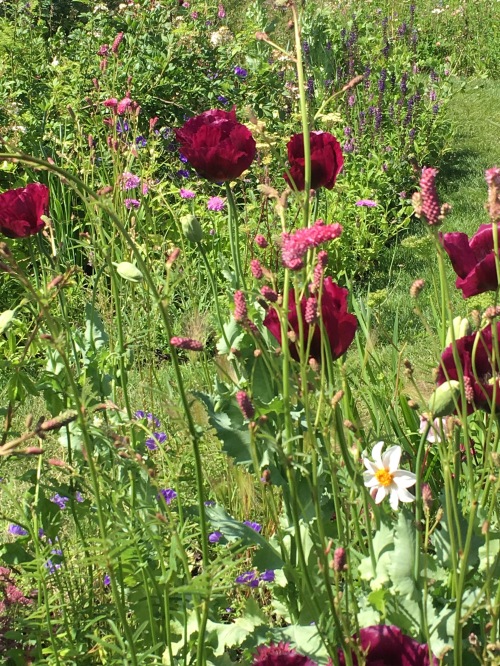 Living in this part of the country – north west England we get all sorts of weathers. None very extreme but it’s been up to 33 miles an hour wind these past few days. I thought I had prepared the garden well – attaching new seedlings to wooden sticks and attaching the sweetpeas to their sticks. However, this isn’t normal windy weather and so plants in pots have been falling over and not the little plants but a magnolia in a pot and a tomato plants and several others.

According to my Facebook memories we’ve had bad weather at this time of year the past few years!

We’ve been daring and put the washing out today, it’ll get dry if it stays on the line!

Anyway, I just wanted to share a couple of pictures of firsts for the season – first dahlia which I grew from seed last summer and first sweet William with a lovely light scent. I’ve come to appreciate scent more and more the past few years. Til next time, hope you don’t get blown away in the wind! 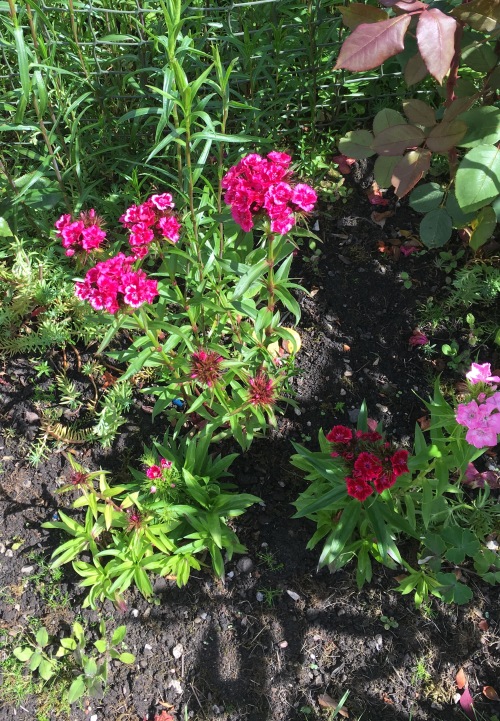 June in my garden

I’m still watching RHS Chelsea flower show on tv (we record most things we watch) and loving seeing the celebrities gardens such as Mary Berry and Kelly Brook. They are huge. As usual I didn’t agree with the medals, one show garden with weeds in it got gold and the beautiful garden by Chris Beardshaw didn’t get a good enough medal in my opinion. That made no sense to me at all! I am looking forward to going to the first RHS show at Chatsworth with my friend next week.

Onto my garden. I have news (I always feel like I’m on Tv’s top gear when I say that) the cats that so loved messing on my garden have moved house with their owners of course. I am so relieved but praying the new neighbours don’t have pets!

I have bedding plants to put in, a few from the garden centre and some homegrown. My little wooden wheelbarrow has had some repairs and a lick of preservative  and is ready for the summer planting.

Plants currently flowering in my garden include the below. A yellow iris that I don’t remember planting, 2 pink roses, one that climbs and one with the roots in the drain (I think), also a geranium and a mock orange in a pot.