This is apparently my 50th post to my blog since I began last year!

So, anyone who knows me and/or has been following my blog for a while will know that for the last year (yes, really that long), I have been project managing the updating/refurbishing of my late grandparents house and finally the garden. I am not going to talk about the house on here as its a garden blog, but just to say that this is complete now taking a lot longer than planned and costing way more too, but that is always the way I believe.

Reversing about 60 odd years ago, my grandparents (Daddy’s parents) bought the house off the plan if that’s how you put it. He loved gardening and so wanted a big garden, they bought a single detached house on a double plot. Until about 4 years ago he grew fruit, veg, flowers and more on this garden and it looked lovely. He then was less able to walk or see so started to build raised beds so he could reach easier. He had a glasshouse full of tomato plants dug into the ground and attached by a complicated support system – still in place when we came to clear it in 2015. There were ponds and much grass – although not as much as now. They moved in when Daddy was about 6 and he build his own shed and planted an ash tree. The shed was sadly falling apart and so had to be torn down and the ash tree huge so it was removed last year, but not before it could seed all over the garden – we are still digging them out now. Sadly, Grandpa died in 2014 and the garden hadn’t really been touched since earlier this year. I would love to have cleared the site myself but it was way too big a project for myself.

Before I continue here are some ‘before work started shots’.

weather induced pond in the back 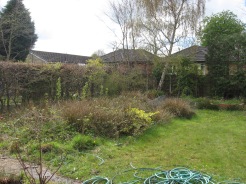 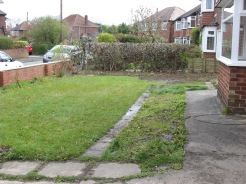 As a lover of gardening you may think the challenge of this garden would be right up my street and if I was to move in to the house, which I’m not, it would have been, but planning a front and back garden for people who I am never likely to meet (it will be rented out and managed by the letting agency) and likely don’t want much work is pretty difficult as its the complete opposite of me.

The drive, pathways and patio were done first in July/August and then the landscapers with their little diggers set to clearing the site and installing new underground drains to deal with the excess water on the site. 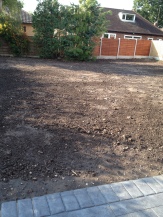 They also prepared and laid the new turf and lots of it too. So glad I don’t have to mow that lawn. When it was finally done, delayed due to the poor weather conditions on numerous occasions I was then free to plant up the borders, oh and did I mention that bearing in mind I was waiting til the lawn had been laid before I did this I was then informed I couldn’t walk on the lawn for 3 weeks. The landscapers left me some boards that I need help manhandling but on with the job I went. I had been buying plants since earlier in the year and keeping them in containers and well-watered but they were desperate for the ground. In total with some help I reckon 60 plants were put in and there is room for so many more. I do still have bulbs to put in and some tidying to do. I was excited to be doing this as I have never had the opportunity of planting 2 gardens from scratch before. I’m not sure the pictures do it justice but here we are:

continuation of the side garden

contination of the side garden 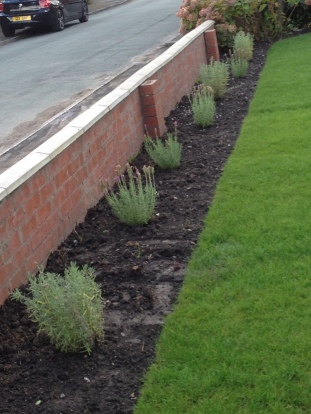 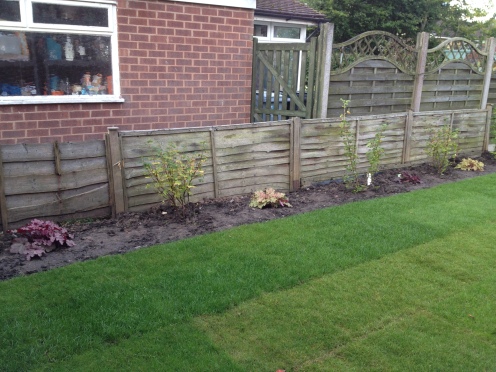 Sad to say, I am not likely to see how it grows for more than 6 months now depending on how long the tenants stay. I shall just have to visit the lovely next door neighbour and peep over the fence.

UPDATE: since writing this blog it occurred to me that I made no mention of the plants I used. So, in the front garden there are lavender planted between the 2 hydrangeas (2 of only 3 plants kept from the previous garden). Also in the front are Japanese anemones, they are pretty white or pink flowers and will soon grow to fill the space allotted to them.

In the back garden (in the last picture) there are 4 flowering currant bushes, 5 heucheras (the pretty coloured leaf plants) – they do have flowers, but I grow them for the leaves. Also in that bed are 2 loosestrife which are pink flowered and relatively tall.

Then in the other borders in the back are a mixture of perennials and bushes – including 2 cornus (dogwood), a Eucalyptus tree, a small acer, a yellow potentilla, a lilac (very small at present), 2 laveteras, 2 mock orange – they have a lovely white flower and strong scent – one which I don’t really like and many other plants.